World class player development is our priority. In addition to unrivaled practice time, off ice training, top level AAA competition and elite player promotion, having an experienced and committed coaching staff is at the top of the list. Our 2021-2022 AAA coaching lineup will have 27 years of professional hockey coaching experience including 14 combined as Head coaches in the ECHL, 2 NHL Draft picks, five former professional players, four with NCAA playing experience and decades of elite level player development and coaching experience.

Coach Graham comes full circle back to the place where his coaching career started in 2008-2009 as an assistant coach with the USHL Indiana Ice and Head Coach of the Jr Ice 18U AAA team. Throughout his 15+ years of professional coaching, Gary has been a part of the coaching staff that won the USHL Clark Cup, IHL Turner Cup, CHL and SPHL championships. He has spent the majority of his coaching career as Head Coach of his hometown Fort Wayne Komets of the ECHL. Fuel fans will be relieved to have him on our side after a pro coaching record of 251-130-51 and boasting a .59 winning percentage in the most competitive AA minor hockey league in the world. Gary spent the 2019-2020 season in Beijing as Head Coach of ORG Beijing that competes in the Russian pro league while also helping build the Chinese National team that will compete in the 2022 Winter Olympics. 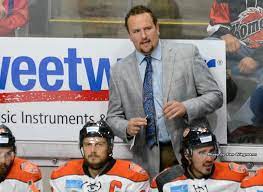 Gary’s resume speaks for itself. To reach the level that he has as a coach, being born and raised in Indiana and not having played competitively after high school, shows his absolute commitment to the profession and unparalleled understanding of the game and how to teach it. Being born in a non-traditional hockey market and not having played professionally are two typically insurmountable hurdles to coaching at the pro level.

Coach Gratz will take the reins of Jr Fuel 16U AAA after spending the 2020-2021 season as an Assistant Coach of the Trine University NCAA D3 hockey team. Brian’s coaching resume is equally impressive for a born and raised Hoosier.

After a playing career as a goaltender with multiple national championships for Penn State and stops in the ECHL and AHL, Coach Gratz began in the ECHL as an assistant with the Reading Royals. He went on to be a Head Coach at numerous levels of pro hockey. He spent three years in the CHL as Head Coach and GM of the Dayton Gems and Bloomington Blaze. He was a part of th 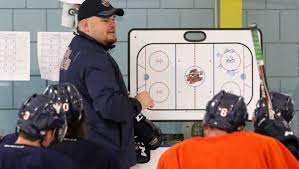 e transition to the SPHL in the same role with the Bloomington Thunder.

After his time in Central Illinois, he got his break in the ECHL as an assistant with Greenville. From 2015 to 2018, Brian led the Swamp Rabbits as Head Coach and Director of Hockey Operations setting two franchise records for the best regular season record and longest winning streak in franchise history.

After Greenville, Brian joined Coach Graham in Beijing as Assistant Coach. His primary duties were working with the team’s forwards and goaltenders. When the 2019-2020 season was cut short due to the COVID pandemic, Coach Gratz came home to Indiana and joined the Trine University NCAA division 3 staff as assistant coach and primary recruiter. Recruiting NCAA caliber student athletes has immersed him into the junior and youth hockey world and created a fantastic network to help educate and promote Jr Fuel players.

One aspect of coaching that Coach Gratz takes the most pride in and will benefit our players, is promotion and the future success of his athletes. During the 2015-2016 season, his team led the ECHL in call ups to the AHL with a total of 38 promotions to 9 different teams. During his time with the Bloomington Thunder, his team led the SPHL in player call ups.

Brent was born and raised in Minocqua, WI and started playing organized hockey at the age of 4, for his hometown organization the Lakeland Hawks. Brent attended Lakeland Union High School and earned 4 varsity letters.

In the summer following his senior season, Brent was drafted by the Washington Capitals in the 6th round 157th overall in the NHL Entry Draft. 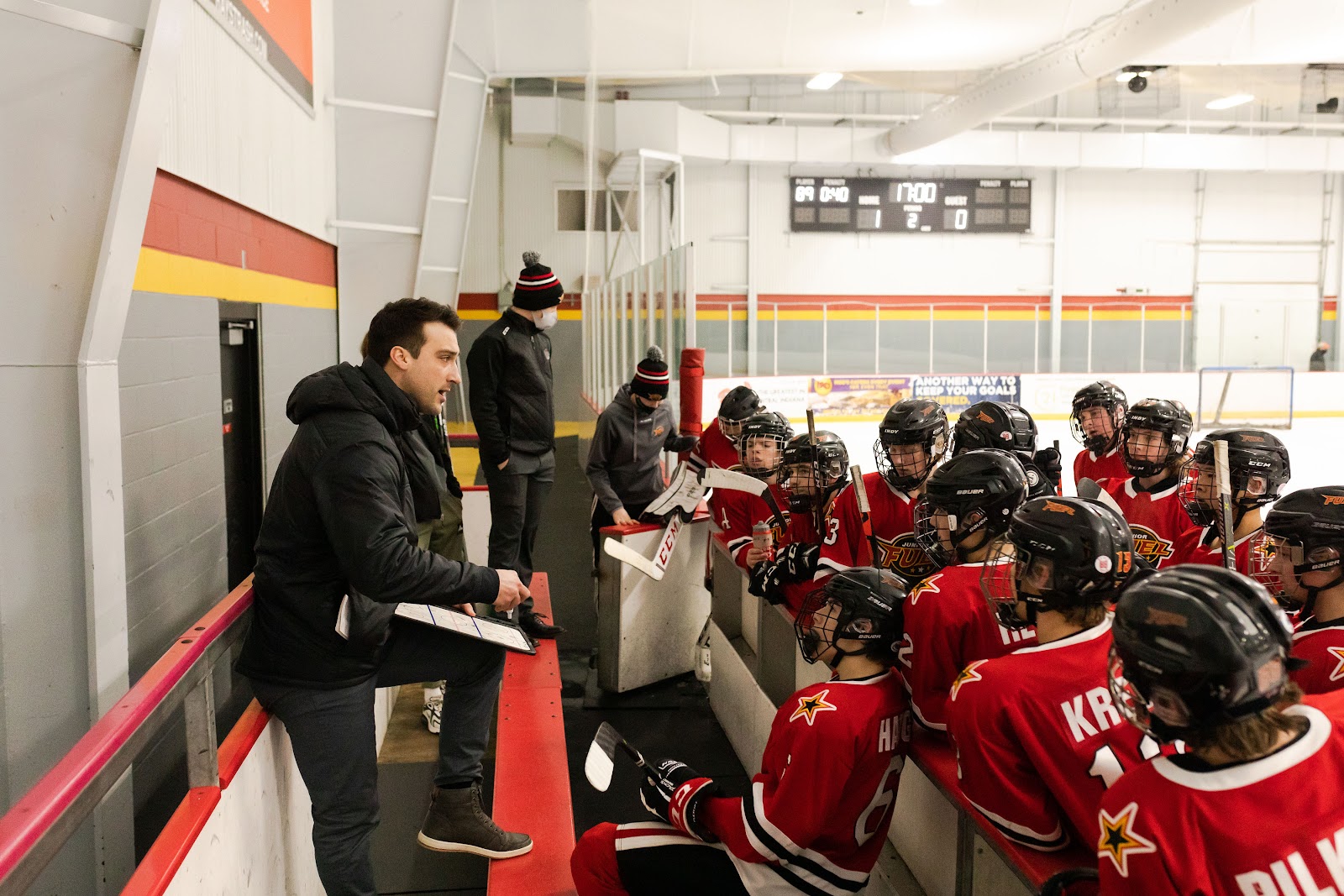 Brent went on to play three seasons for the Indiana Ice (2006-2009). In the 08-09 season Brent was team captain; leading the Ice to their first ever Clark Cup. That season Brent played under Jeff Blashill, current head coach of the Detroit Red Wings.

In the fall of 2009 Brent received a Division 1 scholarship to the University of Nebraska-Omaha. While at UNO Brent played 144 games tallying 19 goals and 20 assists.

In 2013 Brent started his pro career with the Utah Grizzlies of the ECHL and eventually played 3 full seasons with the Grizzlies. In his third and final pro season (15-16) he was named team captain.

Brent has a desire to help all hockey players reach their true potential both as a hockey player and as an athlete, with utilizing on and off ice training methods.

Brent married his wife, Amanda in August of 2014. Brent, Amanda and their 17-month-old son, Ryder moved to Indiana in April of 2018, and currently live in Fishers.

Chris brings a wealth of coaching and scouting experience to his second year as 16U Gold Head Coach. After a heartbreaking OT loss in the state tournament with a trip to Nationals on the line, Coach Blaisuis is determined to put together a team that will compete at the tier 2 National level.

Coach Blaisuis began his coaching and scouting career with the Kenai River Brown Bears of the NAHL. He swapped Alaskan junior teams and spent the next 7 years as a scout for the Fairbanks Ice Dogs and helped build 2 Robertson Cup Championship teams. Chris has also worked as a scout for the Johnstown Tomahawks and the Lone Star Brahmas.

He was a Head Coach in junior hockey for two seasons in the NA3HL with the Wilmar Warhawks and the Rochester Ice Hawks from 2016-2018.

Jake Skjodt was born and raised in Indianapolis, IN. Growing up, Skjodt played youth hockey for the Indy Blues & Indianapolis Checkers before attending Cathedral High School, playing on back to back State Championship teams during his Sophomore and Junior seasons. After his Junior year, he played for the Indy Jr. Ice U18 AAA. 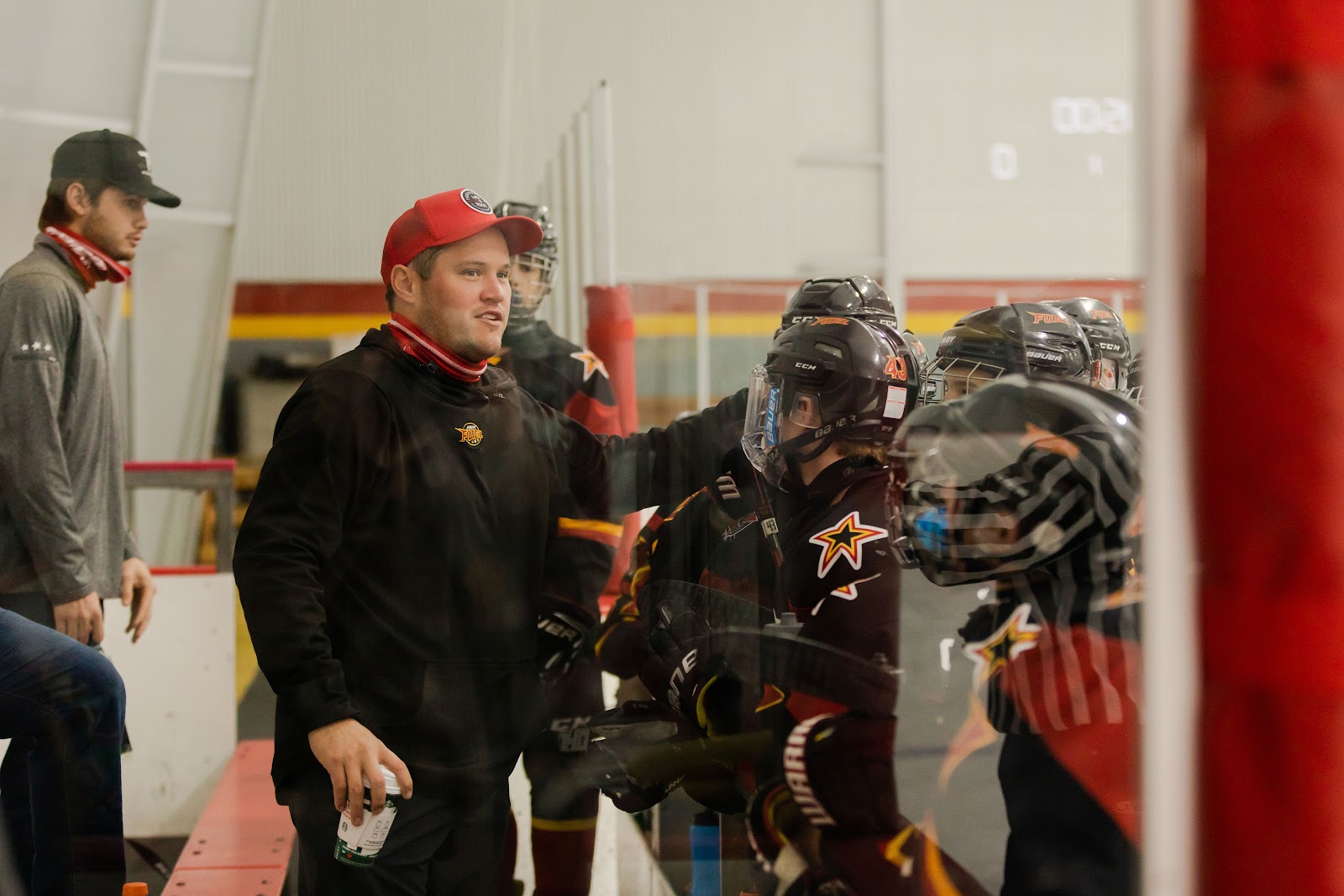 Once completing his playing career, Skjodt returned to Indianapolis to coach the Indiana Jr. Ice U18 AAA (2011-12) & Indiana Jr. Ice U16 AAA (2012-14). Skjodt then departed Indianapolis to be a part of the inaugural coaching staff for the Arizona State NCAA Division 1 program under current Head Coach and Indy native Greg Powers. While coaching at Arizona St. Jake earned a master's degree in Higher Education.

Coach Holdridge grew up in a hockey family in suburban Detroit. After high school hockey Mark earned a spot in the NAHL with his hometown Compuware Ambassadors. After only one season of junior hockey, he continued his hockey career and education receiving a scholarship to  NCAA division 1 Colgate University of the ECAC. 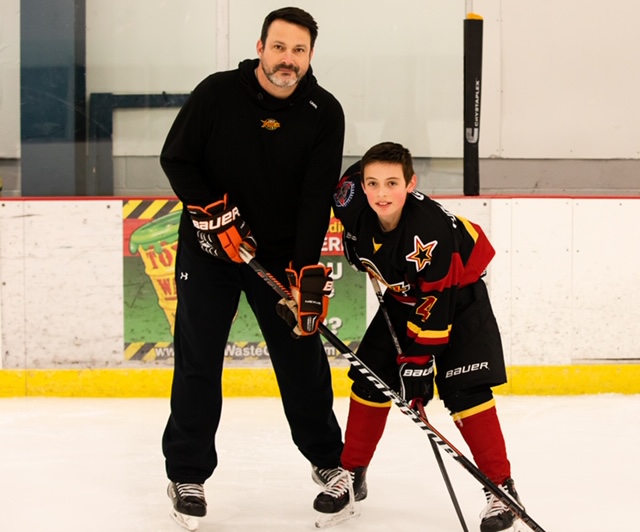 Following Colgate, Mark focused his energy on earning a law degree and pursuing a legal career that eventually landed him in Indianapolis.

Mark returns to the 2008's as Head Coach after a successful 2020-2021 with numerous wins over top AAA competition and a top 40 National Ranking. 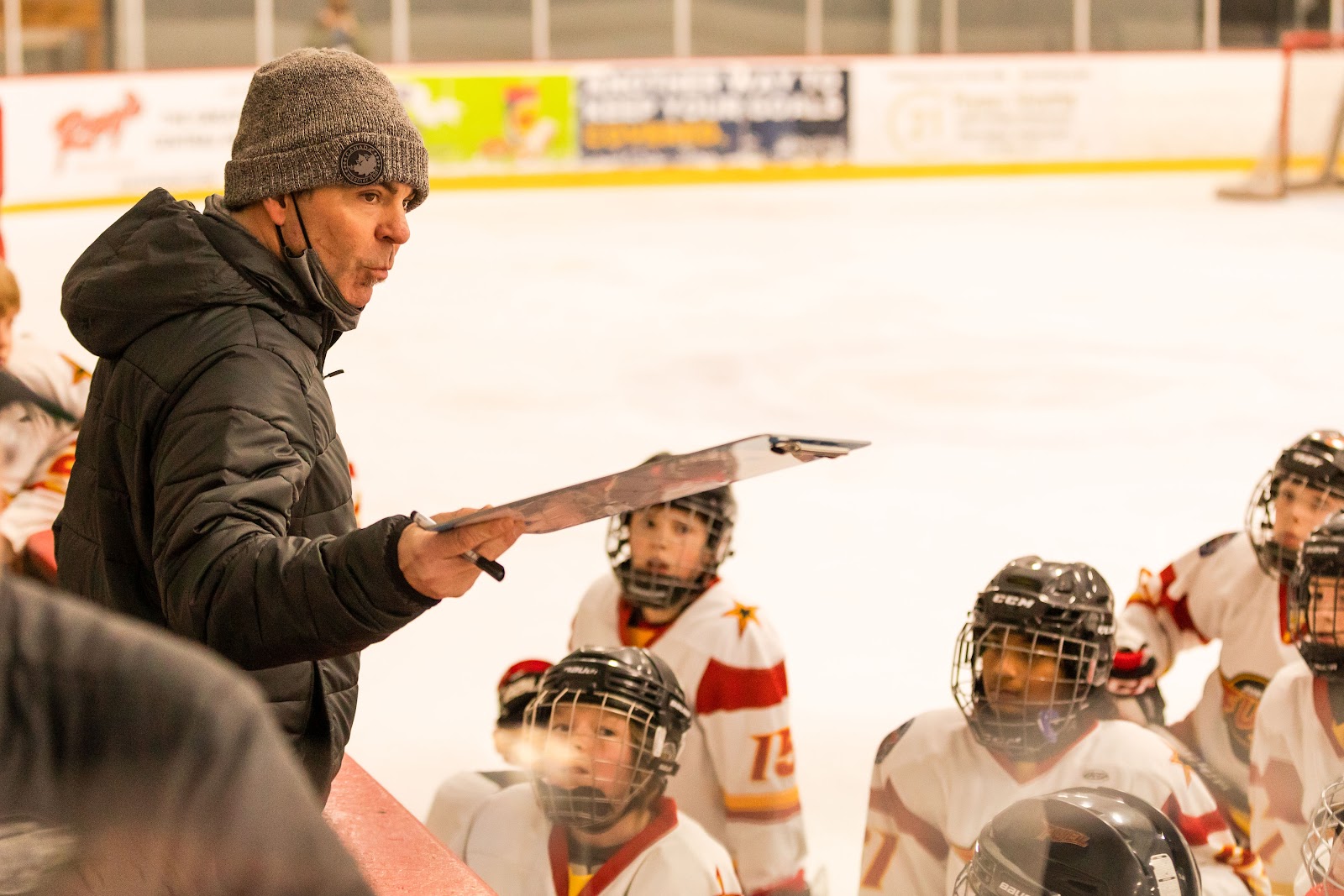 Bernie was an assistant coach with the USHL's Indiana Ice during their 2014 Clark Cup Championship season under Jeff Brown.

Coach John grew up in Sudbury, Ontario where he played youth hockey and went on to play for his hometown Sudbury Wolves of the OHL.  After junior hockey, he racked up nearly 800 professional games in a variety of leagues and cities, winning a championship for the Indianapolis Ice in 2000.

Bernie was an assistant coach with the USHL's Indiana Ice during their 2014 Clark Cup Championship season under Jeff Brown.

Coach John grew up in Sudbury, Ontario where he played youth hockey and went on to play for his hometown Sudbury Wolves of the OHL.  After junior hockey, he racked up nearly 800 professional games in a variety of leagues and cities winning a championship for the Indianapolis Ice in 2000.

Marco joins us for his first year as Head Coach with a unique perspective and playing experience. Coach De Polo grew up and played hockey in his native Switzerland. He played in the top Junior A division and went on to play Swiss minor pro for six seasons.

Coach De Polo brings a hockey background from a country that now competes on an international stage from a very small hockey playing community.  Swiss hockey has a strong focus on fundamentals and are known for producing some of the best skaters in the world.  We are very excited for Coach Marco to implement his experiences from one of the best player development systems in the world.